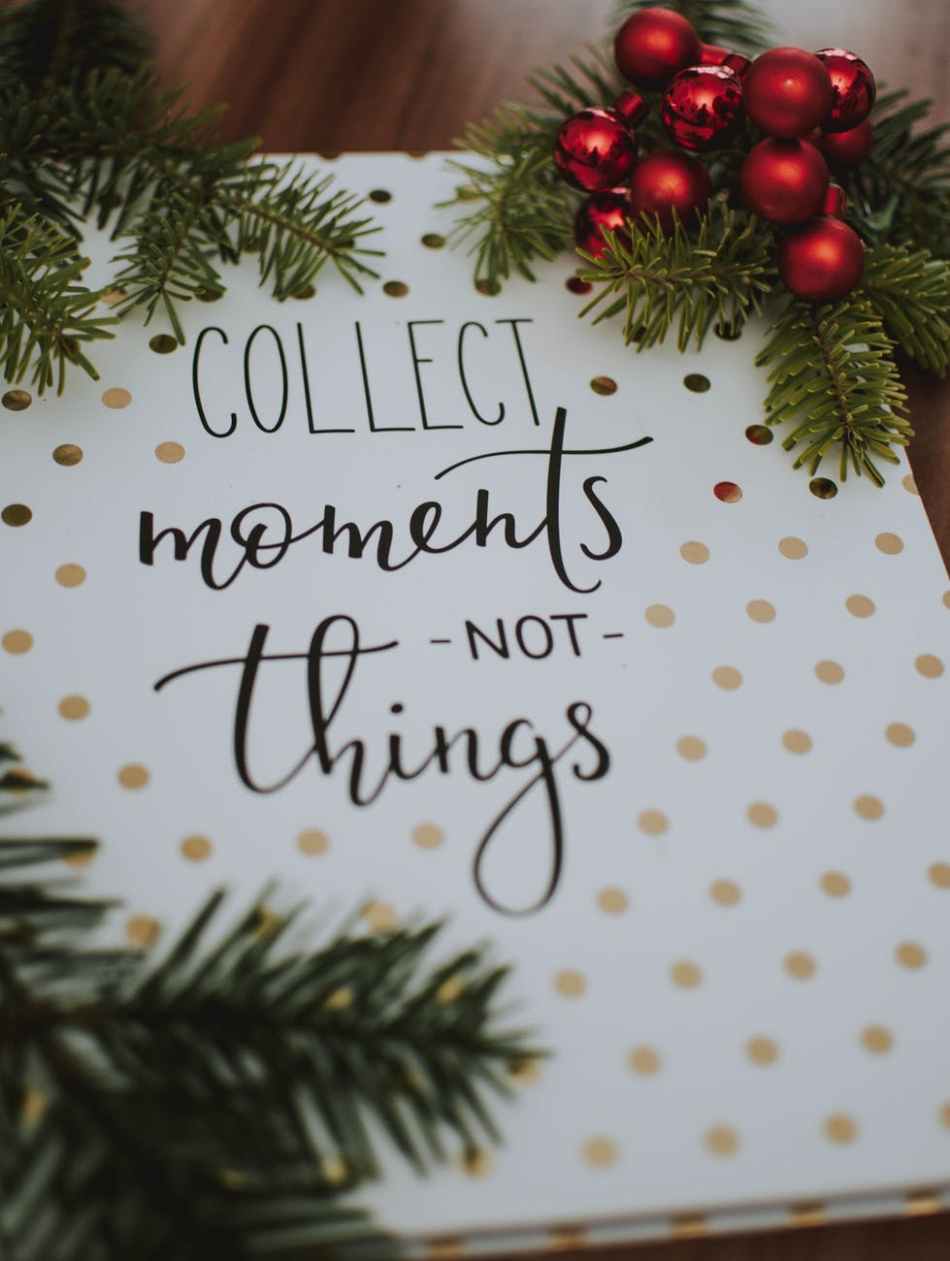 2020 is over! But I wanted to go back and share our weeks leading up to Christmas. The question I had to ask myself, How does this season look different than spring, summer and fall since we are all still home? Well, for starters our kitchen is mostly gutted and I am preparing meals out of the bar. That doesn’t invoke the spirit of the season. After reading and researching, I came up with a plan… Countdown to Christmas.

I made a calendar and listed a family activity for each night. Knowing full well we would not be able to meet each night, I listed them all as appointments regardless. I have a few things still on my plate, so I started by buying a pack of activities from Etsy as a download. From there, my mind was kick started. The calendar was filling up. Remembering I have boys ages 20, 18 and 15 -I have two parents in mental decline – and one husband. What would everyone enjoy?

I chose not to make an announcement about my plan until the night before the first event. I told each person individually that we would be playing a game at the table after dinner the following night. This was met with sighs and rolled eyes. I met those responses with “There will be prizes.” Still no real enthusiasm, but I anticipated that.

I could not tell you what we ate that first night, but I can tell you everyone was head down and frantically answering the questions about Christmas movie characters! The chatter began, from trash talk to asking for help. Our oldest son and my husband were visibly showing signs of serious competition. They actually ended up tying that night! Both received a prize. (At this point, it occurs to me I might not have enough prizes for 24 nights.)

The next night a different game, a different winner. Third night, a different game. However, I was now seeing that I needed to modify what I had downloaded to work more specifically for our family and it’s dynamic. One of the patterns that appeared early, was everyone was finishing at the same time or with the same number of answers. I used a phone timer the first night and we still had a tie. One the third night, I selected one of the words from the Word Search as a bonus word. The person that found that word first would win a prize too. I wrote the selected word in my phone and saved it, so no one could say that I cheated and was playing favorites. Yes, they absolutely would say that! As I explained that one of the words at the bottom was a bonus word and came with it’s own prize, someone asked how will you know when we find that word? hmmm think quickly…”You yell out the words as you find them.” That proved to be extremely hysterical. Granny won the bonus word! We suspect she actually won the whole search, but she would circle the word in the search and not cross it off the list or she crossed it off the list but forgot to circle it in the puzzle. No telling how many times she found the words!

By the end of the first week, everyone that played had won a prize. This is when the boys decided the prizes were rigged and not random. Well…I had been making them pick numbers out of a box and then bringing the prizes out to them with that number on the prize. So yes, to that point the gifts were rigged in order to get everyone’s buy in. Now that everyone had won, I wrapped each item remaining and numbered them. Placed them all under the dining room tree.

Into the second week now. There have been nights that we were unable to eat together, so the game pushed to the following night. The boys have asked what time and when we are playing. That seems like interest and involvement to me! Love it!!

Enter the wild card. My mom has been thoroughly enjoying the camaraderie and laughs nightly. Her husband had not been coming to the table, neither for dinner or games. Two nights ago, she encouraged him to join us and he obliged. He laughed along with the rest of the table. He did not win but was amazed that he couldn’t produce more answers.

I should have known the euphoria would not last for the entire season. The next night, my oldest was at work. Everyone else was at the table. Christmas Word Jumble and a Christmas Song Crossword Puzzle. Granny does word jumbles in the newspaper daily. Poppy does crossword puzzles online daily. I expected another fun 30 minutes. I quickly found out that if my stepdad can not figure something out, that something immediately becomes “stupid”, “pointless” and he doesn’t care. (I imagine that this attitude is commonplace with mental decline.) Unfortunately that attitude spread at the table. The boys gave up quickly and my mom was confused. She couldn’t focus on both, the activity in front of her and the tense words being uttered. She got only two out of twenty on the jumble. She had zero focus and this was a game for her! Mom did better on the crossword but the attitude from her spouse went just about as well as the jumble. How disappointing.

Oh well. Two nights later we had a team competition – gingerbread house decorating! We were suppose to bake cookies one night that week, I mentioned that the kitchen is gutted right? After Monday’s activities, my youngest asked if we could decorate gingerbread houses. My mom did this at my sister’s house a couple years back. She loved it and everyone had fun. I said we could make that happen. Later that same evening, my mom came back out to tell me that she found in the newspaper ads, gingerbread houses to decorate and wanted to go get them. I obliged. We wandered through the store and filled the cart with fun candies and food items to use as decorations. I chatted with my sister who had ideas about how their competition worked. Wonderful ideas that I took and incorporated into our challenge!

We had four different houses, the selection of which team got which house was based on the roll of the dice. Who rolls first, based on who won the challenge the night prior. Each team had an opportunity to have one item specially procured for their house only- as long as the request is in before 11:59pm the night before. During the decorating, there were challenges as well. They have to use only nuts for 10minutes or they have to all move one house to the right for 10 minutes…so many options for me to use…they have to include an outside area! I hot glued the structures together the day before – so this is truly a decorating contest.

The boys were insistent that the houses be “fairly” judged, this meant not by mom! So…let’s involve family in another state! My sister has three kids and we knew they were baking experts. We used video to present each home. Then my sister’s family put together grading sheets. They sat down together and judged. At some point – harshly (I think!!). They sent us the video and we had a winner! The following week, we were to do the same in reverse.

Still ahead were Minute to Win it games, Ad Libs, the Saran Wrap ball game (including coal cards), Christmas lights drive with hot cocoa, bingo with family members from other states via the internet and finally a CoVid Christmas Party Scavenger Hunt. The scavenger hunt will be teams in cars and figuring out the clue, driving to it. Then snapping and submitting the photo in order to get the next clue! Teams are based on whomever you and your family are comfortable with being in your car. CoVid friendly 🙂 Due to life, not all of these occurred. The Saran Wrap game did happen. Hysterical. In the end my oldest won the big prize, $50, but my mom stole the bill the second he set it down. She hid it in her bra and lost it within 30 minutes! Seriously. That made us all laugh. (We had never played this before.)

If you are wondering, on Christmas Eve, everyone got a prize…their Christmas pajamas! An oldie but a goodie. We have continued this tradition since the boys were babies. I know it is hard to believe, but they ask for this too! I love my boys!! This year my 18 year old asked before Thanksgiving when they could get them. No, they can not get them much earlier than Christmas Eve. Why? Because they would immediately wear them and then come Christmas morning – only God knows what they would show up to the tree wearing! Honestly.

I guarantee we will be continuing this Countdown to Christmas tradition. The more our family grows, I only can imagine the humor that will ensue. Part of this joy was just watching my mom interact with her grandsons! Not knowing what lies ahead tomorrow or next Christmas, makes these moments so memorable!

Consider your family and those you care for, none of you have to be a “game people” for some version of this to possibly work. It did not go exactly how I planned but we kept going, happily. My parents don’t like to play games. For my mom, she couldn’t resist being involved (which was the point!). I guess we will just keep adjusting and modifying each year. This season has brought everyone together more than anticipated.

I hope that throughout the Christmas season you and your loved ones were able to just take a moment and enjoy each other. It would seem that the pandemic has brought one blessing, more opportunities for us to be present. Stay well.

0 comments on “Countdown to Christmas”